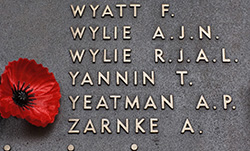 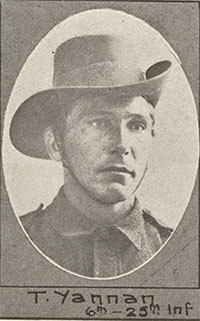 [...] with the group of six Russians from the 9th Battalion who enlisted together at Rockhampton on 14 August 1915, all were listed as casualties by the end of 1916. Akim Petroff from Novozybkov and Nicholas Sholmatoff from Moscow were severely wounded at Armentières just a few days after their arrival at the front; they were invalided to Australia. George Malisheff from Podolia suffered shell-shock at Pozières; he recovered but was killed in 1918. At Mouquet Farm Tehon (Tikhon) Yannin from Samara was killed on the same day that Alexander Tarasenkoff from Orel was wounded; Tarasenkoff recovered eventually, rejoining his unit a year later. Finally, John Tuagarin, also from Orel, had to defend his Russian honour when he was court-martialled in October [...]; he was killed in action in December 1916.