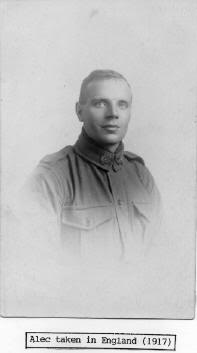 Residence before arrival at Australia Left Russia in 1909, worked in Canada and USA

Arrived at Australia
from Canada via New Zealand
on 25.05.1915
per Marama
disembarked at Sydney

Residence after the war Springfield, near Gosford, Sydney, Gosford

Alexander Mike, The story of my life (as told to his wife, Florence May Gallard Mike, and recorded by her), 1957.

So, yes, finally they were coming home -- or at least returning to the country that was to become their home. Many of them had no other place to call home. That was how the Byelorussian Alexander Mike remembered it: 'In 1918 I was wounded in the chest at Corbie. I was 12 weeks in hospital in France, then 6 months in hospital at Harefield, England. I came back to Sydney a cot case and went straight to Randwick hospital. I was in hospital a total of 17 months-and-a-half and it was just like home after all that time.' These months in a hospital bed were the first period in his life that he was not working, that he was being looked after. It is not by chance that he kept photos of himself with hospital staff and other patients.

Mike was finally released from hospital and discharged from the army. He remembers: 'I tried several jobs but could not keep one as my wound would break out every 3 months. In 1920 I bought 15 acres of bush land at Springfield, Gosford. I cleared half and planted an orchard of orange trees. I had not seen oranges growing before. When I arrived in Springfield I bought a dog for company. I built a 16 x 7 foot shed ... and made a bed of saplings and wire netting. ... I had plenty of advice given me but I found out later it was only by hoboes who had nothing and had done nothing to improve themselves. Anyway, I cleared a few patches and planted potatoes and cabbages. The potatoes when ready were only worth 2/6 a cwt. and not worth digging. I thought of leaving the place, but in the meantime I got a job handy at £3.12.0 a week. That fixed me up a bit.'

He would keep planting his fruit-trees and experimenting with his vegetables for years to come. This was the eternal dream of a Byelorussian peasant -- to own a block of land. It had come true for Alexander Mike for the first time in his life here, in Australia. From now on this country was indeed becoming his home.