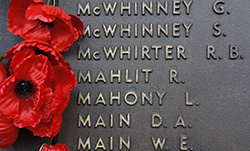 Residence before arrival at Australia Graduated from Seminary for teachers; from 1904 member of Revolutionary Party, in fear of being exiled to Siberia he escaped to Japan from Vladivostok, was in Japan 1½ years, Philippine Islands 2 years

Arrived at Australia
from Manila, Philippines
on 9.05.1912
per Mindorvo (Minderoo)
disembarked at Fremantle, WA

From Russian Anzacs in Australian History

A teacher in Latvia, from 1904 Mahlit was -- according to information supplied by the Australian military commandant where he joined up -- 'a member of the Revolutionary Party operating against the Russian government. In fear of being exiled to Siberia he escaped to Japan from Vladivostok.' After several years in Japan and the Philippines he arrived in Australia in 1912, where he worked as a timber-hewer on the railways, and enlisted at the beginning of 1915, ending up at Gallipoli.

[...] On 2-3 May [1915] almost every Russian from the 16th Battalion was wounded at the battle for 'Bloody Angle', at Quinn's Post. [...] Rudolph Mahlit, the former teacher and political émigré, also rejoined his unit after being wounded here, only to die not long after, during the attack on Hill 60 on 27 August.

From Līga Lapa, The 1905 revolution and Latvian immigration to Australia

Rūdolfs Mālītis, a teacher at the Graši civil parish school in the Cesis District. Like many young people of his generation, he was inspired by social democratic ideas. Together with others, he helped found a self-education circle and an education union. In 1904, Mālītis organized the first social democratic circle (named Ugunskurs -- Bonfire) in his civil parish. The next year several similar circles from the neighbouring civil parishes joined to form the Latvian Social Democratic Party's 4th district of Maliena. In the Book of remembrance Mālītis is characterized as a just, calm, and even-tempered man. He was a powerful and talented orator, especially in the revolutionary and popular meetings of 1905. During a meeting in June, along with some others, he was arrested by Cossacks. They were tied to horses and dragged six kilometres to an estate in the neighbouring Sarkaņi civil parish.

Among these letters [to Jacob Silin in Australia] are several from Mahlit, mostly in Latvian. He tells about the life of their small émigré community in Nagasaki, which included such famous narodniks as Byelorussian Dr Nikolai Sudzilovsky-Russel, Jew Boris Orzhikh, and Russian Pavel Klark. As his financial situation rapidly deteriorated Mahlit wrote to Silin in October 1910: 'I no longer have any way out. If I do not receive anything from you then I have to go and hang myself. There is nowhere to live and hold out. I no longer have any credit!... If you haven't sent it [money] ― send it immediately, as much as you have'. Silin did send money to rescue his friend, but it was intercepted and appropriated by someone to whom Mahlit owed money. In November 1909 Mahlit, after a year and a half in Japan, reached Manilla in the Philippines, where he was stranded for more than two years, finally landing in Fremantle in May 1912 under the alias of Charles Girgens.