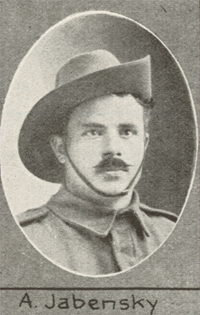 Arrived at Australia
from Far East, Moji
on 10.07.1913
per St Albans
disembarked at Brisbane

Often it was marriage that put an end to their nomadic life-styles [after the war]. Andrew Jabinsky, a former engineer, had been discharged in London with 'abdominal malignant disease' and returned to Australia in 1919 after a brief spell as a munitions worker there; the next two years he spent moving around between Rockhampton, Mount Morgan and Babinda, probably cane-cutting. In 1928 he moved from Queensland to Newcastle, New South Wales, where he married an Australian woman, had a child and started working at BHP as an engine-fitter. He applied for naturalisation in 1939 but by then, as his unsteady handwriting suggests, he was very sick. Thanks to his family's care, however, he had several more years of peaceful life, and died in 1951.