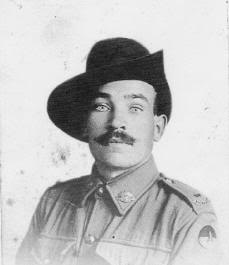 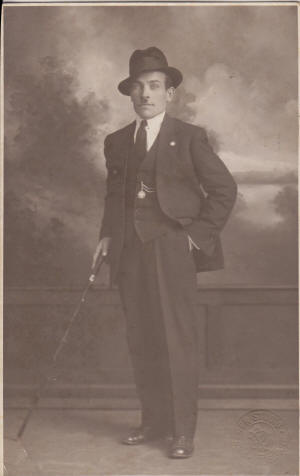 Residence before arrival at Australia Served in 4th Siberian Infantry, 1909 to 1912

Arrived at Australia
from Far East
on 23.05.1913
per Inaba Maru
disembarked at Brisbane

'One day, when we were sitting around the table having hot potatoes in winter', Justin Glowacki's daughter Barbara remembers, 'I said, "I've just been at school and we spent the whole lesson talking about that fantastic man called Simpson." And my father absolutely saw red and started screaming, "That idiot! He killed more people with his stupid behaviour than he saved. He'd be carrying a stretcher and the next minute he'd be doing funny shapes to the Turks, saying, Here I am, jumping up and down, and the wounded person'd get shot." And he said, "How many donkeys and wounded people got killed because of his stupidity!" He used to say that he had bellyaches so he would not have to work with Simpson, because going out with him was very dangerous.'

Justin Glowacki's own life-story was full of adventures. He was the great-grandson, if the family tale can be believed, of a rich landlord, who frequented the czar's palaces. Justin started his career in the Australian army as a cook but, on the ship over to Egypt, 'He was changed from a cook to a batman', as Barbara tells it, 'he looked after officers, because they realised that he was a gentleman, he knew a lot about cultured things. ... When he was disembarked at Gallipoli, they assigned him to a stretcher-bearing unit, because they were looking for short men.' He was a stretcher-bearer there but it couldn't have been with Simpson since Glowacki disembarked at Gallipoli on 2 September 1915 and Simpson had been shot almost four months earlier, on 19 May. Well, there might have been other Simpsons along his way ...

Glowacki had an encounter at Gallipoli which would prove useful later in his life -- 'he helped a man survive, by going and picking him up, and carrying him all the way back across the beach to the boats which were taking the wounded back to the troop-ships. It was Frank Savary's cousin or family member whom he actually saved. And the fellow asked his name, he had been an officer. He remembered him', Barbara relates, 'and so after the war Frank Savary would do anything my father asked.' Years later Frank Savary would rescue Justin's family trapped in Poland during the Second World War [...]